…for the coming new year (and for any time, come to think of it). It is from the pen (or perhaps typewriter) of Doris Lessing.

Whatever you’re meant to do, do it now. The conditions are always impossible.

Merry Christmas to all and to all a good night.

People might say such a list is subjective, but when it comes to the number one spot, it is decidedly not.

1)  A Christmas Carol, the 1951 version starring Alastair Sim. This is the greatest Christmas movie ever, the only version of the Dickens tale you need watch. Any other is inferior. This is so. There is no debate. If you disagree you are wrong. There is a colourized version which I would suggest avoiding.

2) Whistle Down the Wind. 1961. Young Hayley Mills, youngish Alan Bates. An unusual tale, very beautiful, about children and their ability to believe. Bonus marks for use of “We Three Kings,” an under-used carol and a brief role for Richard Attenborough (un-credited, I think).

3) The Bishop’s Wife. 1947. What is not to love? David Niven, Cary Grant, Loretta Young, Monty Woolley, Elsa Lanchester. A Bishop, an angel, faith, love and sacrifice. Sophisticated, smart, with plenty of humour.

4) Miracle on 34th Street, 1947 version. Wee Natalie Wood (her best role!), Maureen O’Hara and a wonderfully sophisticated look at marketing. The only good thing about the remake is Richard Attenborough as Kris Kringle.

5) For this spot I’ll give a short list of honourary mentions: Three Godfathers – a John Wayne directed by John Ford Christmas tale, unusual, clever and quite touching; It’s a Wonderful Life (a movie one doesn’t really “get” when one is young — you need to have failed a lot to appreciate it!); I’ll Be Seeing You (I find this to be a major tearjerker); Holiday Inn/White Christmas (if only for the song and dance); Christmas in Connecticut (with a very funny Barbara Stanwyck and the ever pill-ish Dennis Morgan); The Sound of Music (yes, I know it isn’t a Christmas movie and it even has Nazis in it, making it extremely unfestive, but I love to watch it at Christmas).

And thus ends my list. I am certain I have forgotten some, but I urge any of you who have not seen the top three to do so, pronto.

This picture is from a day I spent in Gubbio last year with a wonderful Vietnamese friend, at almost exactly this time. The entire city was a life-sized nativity scene. Remarkable. 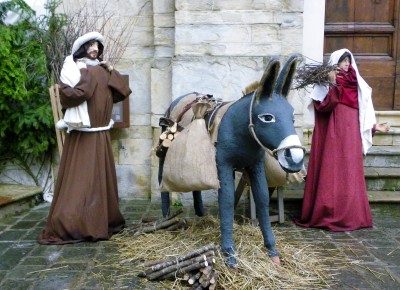 A few years ago, my Better Half invited Martin Amis to Toronto to give a talk at a private venue. There was much that was delightful in that talk, but above all, what was noteworthy was this quote regarding the left and Islamism:

I take my hat off to the left in that they’ve found something to defend in a movement that is racist, misogynist, homophobic, totalitarian, inquisitorial, imperialist and genocidal. Perhaps it is their [Islamist’s] view on usury that is attractive to the left — low interest rates, or non-existent interest rates.

I kept thinking about that quote during the Canadian election campaign this fall, as those about me shrieked and moaned about the niqab. In particular, what struck me were two women I know who call themselves “feminists” (and who would most definitely identify as leftists) and their views on the matter.

For the record, I wish the matter had not become such a focal point, and further, I don’t believe in “banning” niqabs or burqas. But I see a difference when it comes to a solemn oath in which someone is pledging their loyalty to their new and free and (presumably) chosen country. And the reason I feel that way is that I believe in the equality of the sexes, and in the importance of a civil society that protects that equality. So I sort of assumed any “feminist” would, at the very least, not treat wearing a niqab as though it were heroic and not, you know, say anything monstrously stupid on the matter.

Boy, was I disappointed. One of these feminists posted on one of her social media pages that not only should a niqab be accepted at a citizenship ceremony, but that it would be ok with her if someone wore a Nazi uniform at said ceremony. Lovely. (This is the sort of moral bankruptcy with which we are contending.)

The other posted a celebratory “Good for her” when the woman at the centre of the case took her oath with her face covered. Now, this latter person is a young woman who uses words like “patriarchy” unironically, and who took Women’s Studies courses at university unironically. She is always ranting about the “objectification” of women but then — in the heat of the election campaign — praised to the skies the First Nations woman who won Mrs. Universe and trashed Stephen Harper shortly thereafter. So I guess her anti-beauty pageant values were subject to change, if a beauty pageant allows an expression of Harper Derangement Syndrome.

Speaking of which, both of these ladies suffer from HDS, which was likely part of the reason for their pretzel-twisting logic about women’s equality/Nazi uniforms and so forth. But I really think the broader motivation was what Amis was describing — a noxious sort of anti-Western/anti-American worldview that renders all common sense-thinking disabled.

There aren’t many, particularly when it comes to battling jihadis/Islamism (why we miss Hitchens and Norm Geras and why we appreciate Paul Berman), but Hilary Benn has revealed himself to be one such rare bird. This speech is extraordinary — the moral clarity, the integrity, the intelligence. Would any Canadian NDP or Liberal politician speak this way? No. Mediocrity is certainly the default position of both of those parties.

The really fun part of watching this clip is, of course, Jeremy Corbyn’s expression. He’s all like, damn, but I love Islamists! And the West is bad! We’re bad, bad, bad...blah blah blah. What a major loon.

From the speech – stand-out quote (among many):

We are here faced by fascists. Not just their calculated brutality but their belief they are superior to every single one of us in this Chamber tonight and all of the people that we represent. They hold us in contempt. They hold our values in contempt, they hold our belief in tolerance and decency in contempt, they hold our democracy — the means by which we will make our decision tonight — in contempt. But what we know about fascists is that they need to be defeated. And it is why, as we have heard tonight, socialists and trade unionists and others joined the international brigade in the 1930s to fight against Franco; it is why this entire house stood up against Hitler and Mussolini; it is why our party has always stood up against the denial of human rights and for justice. And my view, Mr. Speaker, is that we must now confront this evil.