Dear readers, I am back from a wonderful trip to Ireland, about which I will be writing here (and in other places) anon. I wanted to start with a picture of myself taken on Whiddy Island, Ireland. I rarely post — and even more rarely appreciate — pictures of myself. But I truly like this photo, because I think it sums me up in a frame (a woman with bad hair who, when in the presence of a kitty, is oblivious to all else). I will write more about this photo later, and in particular this cat, but for now I would just like to thank my colleague Hermann Low for taking and sending it. Danke. 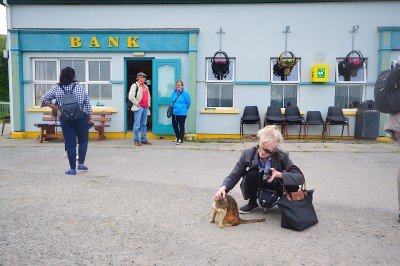 Such a huge loss – what a brilliant mind and what a fine writer. As someone who works with students who have similar disabilities as Krauthammer had, I know what admiration I feel for those kids when they recite essays and produce something thoughtful and well-sourced, sans whining or woe-is-me-ing. And this is what Krauthammer did for decades – he started long before many of the technological advances that help the kids with whom I work were on offer.

What strikes me about his death is how even those opposed to his political views admired his intellect. Yes, there are bigots on the left who can’t grasp that someone with whom they disagree can be brilliant, but I’m tuning all of them out here.

Finally, here is a lovely tribute from John Podhoretz.

I’ll say it. I did not like the series finale of “The Americans.” Columns written about the finale have been fulsome, gushing. “Tremendously satisfying” wrote Mike Hale in the New York Times; “Elegant, potent, unforgettable” wrote Emily Nussbaum in the New Yorker. Well, I’ll give her that last one. Unforgettable it was, as is anything that is deeply frustrating and utterly at odds and out of character with what has gone before.

For me, it felt very much like an Emily Litella finale. For all you Millennials reading this, Emily Litella was a character on Saturday Night Live, back when SNL was often quite good – yes, there was such a time. (And as long as I’ve got your attention, Millenials – get off of my lawn.)

Played by Gilda Radner, Litella would give a news editorial about something she had misheard or misunderstood – for example, “Soviet jewellery.” She would carry on about Soviet jewellery until the news anchor would interrupt her and let her know it was “Soviet Jewry.” She would then shift in her seat a bit, look embarrassed and smile at the camera saying, “Never mind.”

Rather than being called “Start”, I think the finale episode should have been called “Never Mind.” Never mind Stan Beeman’s history of patriotism; never mind Elizabeth’s history of being a true-believing automaton; never mind that Stan knows the couple he was looking for were likely behind the death of his partner, Agent Amador, and behind the deaths of Gennadi and Sofia and so many others, not to mention the corruption of Martha and so many other crimes. Never mind any of it.

I never thought the show would end with my dream scenario – Elizabeth in FBI prison, Philip defecting and becoming a self-help guru, Oleg going home, Paige trading in Noam Chomsky for Norman Podhoretz. I understand that the writers and producers of the show could in no way make every viewer happy, any more than they could give every character a happy or fair ending. But the way it ended felt false, as though the writers had punted. There needed to be some justice, and there was none. The worst people got away with it. Those stuck in the middle were left suffering. Our hero, Stan, was left gutted. And Paige still doesn’t know her parents are murderers.

This is a show that I have adored – and I mean, with all my heart and soul. I have driven friends and family members crazy with my endless yammering and stressing and theorizing about it. I have appreciated so much about the show – the actors, the writing, the era. I am roughly the same age as Paige, and every poster on her wall is one that I had, every ‘Esprit’ sweatshirt is one I wore, every news item she discusses with Pastor Tim or her parents is one that was on my mind.

I have appreciated that “The Americans” was always too intelligent a show to romanticize communism, to portray it as benign and misunderstood. The criminality and cruelty of the Soviet system was made clear throughout the show’s six seasons. Why, Pastor Tim even challenged the Jennings in regards Moscow’s treatment of Soviet Jewry. Which is why it seemed strange to let the anti-heroes pay only a limited price, and why I keep coming back to that word – justice. There needed to be justice. Even a teeny bit. The only glory poor Stan got was Aderholt admitting he should have listened to his suspicions about the Jennings family. Further, the only…

My latest, at the Wall Street Journal (about Doug Ford).