Very glad he did not apologize, though I found his comments sophomoric and betraying his standard lack of understanding of history. He might have wanted, prior to his comments, to have read Paul Fussell’s wonderful essay from 1987, Thank God for the Atom Bomb. (FYI, this link claims the article was written in 1981, but that is incorrect.)

The last surviving cast member of Casablanca has left us. Here she is in that wonderful scene:

On the occasion of VE Day, I recommend this series (it is available on Netflix). It is fascinating and frankly, we often forget how important stopping the heavy water production in Norway was; if the Germans had got the bomb before us, it would have been beyond disastrous. The series certainly has its standard 21st century biases — for example, the Americans are made to look like bullying allies, whereas if you read World War II history, rather the opposite is true.

But the basic facts of the sabotage are there, and I love the portrayals of the Norwegian heroes — men for whom we should be forever grateful and who, in true Norwegian fashion, were ever humble about what they did (a profile of one of them here).

My uncle — his war letters website is here — was being trained to parachute into Norway, interestingly enough. It is possible they were considering him to be part of this project, as he had the language skills required. Either way, the likelihood of survival was slim.

I got a kick out of this movie, and I’d love to see this one, but I believe this most recent series to be the best of the lot.

David Cameron is really impressive, and spot-on, here. So well done. And I think Corbyn actually has himself convinced he isn’t a bigot (like so many bigots I know).

Better late than never, I suppose! I always enjoy attending a Good Friday procession, wherever I am in the world. Last year, I was in Italy; this year in little Italy. I took a heap of pics, but I will only share three today.

I love the different footwear here — especially socks-with-sandals guy and high-heeled lady. Not sure they’re really dressed as sheep-herders may have been in days of yore, but what the heck. 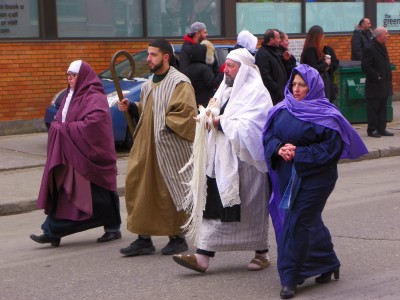 I get a kick out of these young ones holding up the sign. I rarely extol the multi-cult aspects of Toronto, because I find such carrying on tiresome, but this image is indeed sweet. 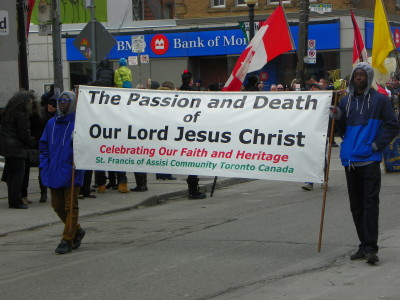 And this, because I have just always loved the story of Saint Veronica. 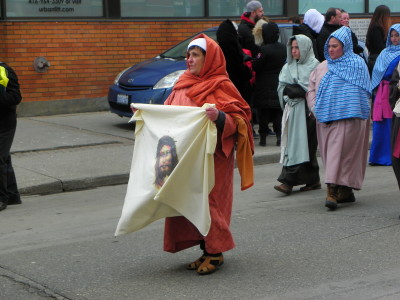