One time when my dad was inebriated (which could have been one of virtually any night – or day – during a decades-long period) he told me that he thought there were “five great voices” out there. He began listing them: Sinatra, Nat King Cole, Bobby Darin, Tony Bennett and…he was stumbling around trying to remember the fifth and finally he added “Vic Damone!”

Totally agree. And I think this version of this song is magnificent. I seem to recall it was used in one of the early episodes (maybe the first) of “Mad Men,” when we saw what a cad Don Draper was.

What are you looking at, lady? (Kitty I saw shortly after one of the earthquakes I wrote about here – I was so upset I went to commune with the animals. The animals just thought I was silly.) 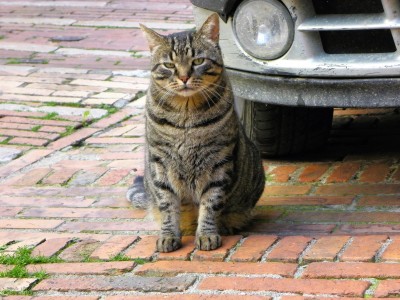 It’s here at the Wall Street Journal (apologies if there’s a paywall).

Dear readers, please don’t forget to keep checking my tumblr, where I am posting my uncle’s letters from World War II. There are still more letters to post, as well as photographs, documents and some of his poetry.

Somehow I found this and it is a fascinating lecture, if you have the time.  There’s a transcript at the link, or you can listen/watch right here: