Although Italy has seen some protests these past few months, inspired by the protests in the U.S. after the death of George Floyd, they never amounted to the kind of mad tearing down of statues and such by the mob as we have seen in North America. A few statues in Italy got paint thrown on them, but nothing else ensued. I think one of the reasons this sort of revising of history has not taken off in Italy the way it has in younger countries, is simply that they have so much history around them. They couldn’t begin to tackle it all – it would be exhausting. (Heck, if Italy got rid of everything tainted with slavery they would have to remove everything Roman.) One example: on my way to classes in Perugia these past few years I have walked by the plaque seen below. It shows the Fascist symbol – the fascio littorio — with Anno XI, meaning Fascist year 11, i.e. 1933 (the year the building was put up, one assumes). No one even seems to look twice at it. True, the university where I study has a Fascist-era painting in one of its main halls that has been revised – the face of Mussolini has been painted over with a generic Italian man’s face – but I can see why that needed to be done.

The story behind that wonderful, joyful photo.

Full text of Hirohito’s speech of August 14, 1945 accepting the Potsdam Declaration. To consider: many Japanese people were unaware of the extent of their country’s predicament and, surprised by the speech, had difficulty agreeing with the Emperor’s orders; the Japanese he spoke was “court Japanese” and very unlike the street language non-royals would have used; he specifically mentions the atom bombs as part of his decision. Revisionists can say what they like, but President Truman’s decision shortened the war and saved lives, both Japanese lives and Allied lives.

To our good and loyal subjects:  After pondering deeply the general trends of the world and the actual conditions obtaining in our empire today, we have decided to effect a settlement of the present situation by resorting to an extraordinary measure.

We have ordered our Government to communicate to the Governments of the United States, Great Britain, China and the Soviet Union that our empire accepts the provisions of their joint declaration.

To strive for the common prosperity and happiness of all nations as well as the security and well-being of our subjects is the solemn obligation which has been handed down by our imperial ancestors and which we lay close to the heart.

Indeed, we declared war on America and Britain out of our sincere desire to insure Japan’s self-preservation and the stabilization of East Asia, it being far from our thought either to infringe upon the sovereignty of other nations or to embark upon territorial aggrandizement.

But now the war has lasted for nearly four years.  Despite the best that has been done by everyone–the gallant fighting of our military and naval forces, the diligence and assiduity of out servants of the State and the devoted service of our 100,000,000 people--the war situation has developed not necessarily to Japan’s advantage, while the general trends of the world have all turned against her interest.

Moreover, the enemy has begun to employ a new and most cruel bomb, the power of which to do damage is, indeed, incalculable, taking the toll of many innocent lives.   Should we continue to fight, it would not only result in an ultimate collapse and obliteration of the Japanese nation, but also it would lead to the total extinction of human civilization.

Such being the case, how are we to save the millions of our subjects, nor to atone ourselves before the hallowed spirits of our imperial ancestors?  This is the reason why we have ordered the acceptance of the provisions of the joint declaration of the powers.

We cannot but express the deepest sense of regret to our allied nations of East Asia, who have consistently cooperated with the Empire toward the emancipation of East Asia.

The thought of those officers and men as well as others who have fallen in the fields of battle, those who died at their posts of duty, or those who met death [otherwise] and all their bereaved families, pains our heart night and day.

The welfare of the wounded and the war sufferers and of those who lost their homes and livelihood is the object of our profound solicitude.  The hardships and sufferings to which our nation is to be subjected hereafter will be certainly great.

We are keenly aware of the inmost feelings of all of you, our subjects.  However, it is according to the dictates of time and fate that we have resolved to pave the way for a grand peace for all the generations to come by enduring the unendurable and suffering what is unsufferable.  Having been able to save *** and maintain the structure of the Imperial State, we are always with you, our good and loyal subjects, relying upon your sincerity and integrity.

Beware most strictly of any outbursts of emotion that may engender needless complications, of any fraternal contention and strife that may create confusion, lead you astray and cause you to lose the confidence of the world.

Let the entire nation continue as one family from generation to generation, ever firm in its faith of the imperishableness of its divine land, and mindful of its heavy burden of responsibilities, and the long road before it.  Unite your total strength to be devoted to the construction for the future.  Cultivate the ways of rectitude, nobility of spirit, and work with resolution so that you may enhance the innate glory of the Imperial State and keep pace with the progress of the world.

Emphasis mine – I love the use of understatement. I also quite like the line about enduring the unendurable.

Even by the standards of AOC, her comments on Father Damien were moronic. This article offers a very thorough (and generous) analysis of her beliefs.

It’s not an original thought, but it’s one that bears repeating: iconoclasts like Ms. Ocasio-Cortez have a pitifully stunted view of humanity. And I mean that: we should feel pity for them. Imagine looking at an image of someone like Father Damien (or Queen Lili’uokalani, for that matter) and seeing nothing but a demographic: sex and race and nationality. He dedicated his life to providing pastoral and medical care to thousands of souls who suffered from a painful and humiliating disease before finally succumbing to the disease himself. Why can’t Ms. Ocasio-Cortez see that? Because her mind is infected with a very different illness: a poisonous ideology which renders all white men as mere villains in the tragedy of European imperialism.

“Stunted” is the perfect word for her. Is it only because she is young? Will she grow out of it? One lives in hope.

I have a new piece out – my thoughts on Hagia Sophia’s (re)conversion into a mosque.

As I wrote two years ago.

Today is the feast day of St. Mary Magdalene. I love this image of her, by Italian artist Carlo Crivelli, circa 1470. She is giving some excellent side-eye. FYI, this is a detail of a larger painting. 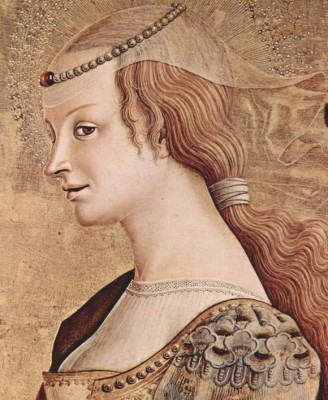 There is sanity out there:

Maybe we should enlarge the lens. Frankly, I’m weary of the whole category ‘white people’, which throws folks of wildly different backgrounds, from Russians to Jews to Scots, into one big indiscriminate pot. So let’s talk about people, full stop. As a species, we’ve been treating each other like shit from the year dot. The horrors to which we’ve subjected one another, including slavery but a great deal else, are so incomprehensibly dreadful that no one, as an individual, could conceivably bear the crushing weight of all that torture, mass murder and sadism. If guilt is inherited, then every last one of us should be condemned to Dante’s nine circles of hell.

None of us chose the world in which we emerged. We didn’t pick our race, sex or natal nationality; any inbuilt leg-up or disadvantage these traits conferred at birth was not of our making. We didn’t select which awful history soaks the ground at our feet. It’s insensible to feel ‘guilty’ or ‘ashamed’ about something you didn’t do. It’s entirely sensible to feel regret, sorrow and abhorrence about the likes of slavery. It’s commendable to be informed about the past and to try to understand the nature of its wretchedness, as it’s also commendable to strain to leave the world a little better than you found it. But claiming that what happened before you were born is all your fault is not only ridiculous. It’s vain.

Dear readers, I am currently in the thick of this amazing book, Hope and Memory: Lessons from the Twentieth Century, by Tzvetan Todorov. Here’s an eminently sane Romain Gary quote from the book:

The bombs I dropped on Germany between 1940 and 1944 maybe killed a Rilke or a Goethe or a Holderin in his cradle. And yes, if it had to be done over, I would do it again. Hitler had condemned us to kill. Not even the most just causes are ever innocent.

The great actor Sir Ian Holm died recently. He was wonderful in Chariots of Fire, of course and people tell me he was fine in the Lord of the Rings trilogy, which I haven’t seen. But the movie I most loved him in was The Emperor’s New Clothes, a movie that imagines Napoleon coming back to France from St. Helena, and not being recognized. The former Emperor, down on his luck, meets and falls in love with a fruit vendor, and decides to help her fix her failing business. This has to be my favourite scene in the film, a moment that captures the importance of leadership and planning. So inspiring – whatever you do, do it well!