A Series of Unpleasant Experiences

The first time it happened, I was in Poland. It was shortly after the fall of the Berlin Wall, and I had been studying in Paris and working as an au pair. In Paris, I had become friends with a Polish classmate named Magda. We drank wine together and talked about the future, always in French, as I had no Polish and she had limited English (but very good Russian). Magda was intellectual and funny and when she returned to Poland I missed her company. A few months later, I experienced some drama or other and decided that a change of scenery was in order. I booked a ticket to Warsaw.

Once there, I bought some Solidarnosc paraphernalia, which, after the fall of the Wall was easy and safe to purchase. I tried the delicious “Wuzetka” or “WZ” cake: I still remember it fondly. Magda’s family welcomed me, putting me up on their couch. They talked a lot about their fear of a potentially-united Germany. “We get rid of the Russians; we get the Germans again,” her mother said. The family had suffered recent deaths from cancer — Magda’s father and brother — which they were sure were due to Chernobyl. I felt for them and appreciated their openness.

Magda and I made plans – visiting Krakow was a priority. What else did I want to see in Poland? Well, I told her - unaware I was engaging in brinksmanship - Auschwitz. I suppose “wanted” is a strong word. I felt that I should. I had to. I would. I told her as much. She rolled her eyes. “They made us go there in high school.” I pointed out that she need not come with me. That didn’t seem to improve her mood. “Why do you want to go there?” I pointed out the obvious. It was history. It was horror. It was the very least I owed the victims.

“Polish people died there too,” she said. I had never suggested they hadn’t. “Yes, I know, many of the Jews in Auschwitz were Polish…” I began, only to be interrupted with, “I mean Catholics died there,” she said. Oy. There we had it. Real Poles. I pointed out that I had never said or thought otherwise. Most of the victims at Auschwitz, however, and of the Holocaust, were Jews. Wannsee was, after all, the Final Solution of the Jewish Question. She shook her head. “No.” she said. “There weren’t nearly as many as they say.” And there we had some more of it. I was stunned. I was quite young and had never been exposed to this kind of revisionism and trivializing. Now, sadly, it is old hat to me.

I went to Auschwitz without her. She was cool to me for the rest of my visit and made political comments designed, I think, to pick a fight. I resisted. But it got to the point that I — pathologically introverted and never able to handle conflict well — decided to retreat. I booked into a hotel. Another day of dealing with the fury I could feel simmering off of Magda would have been too much.

After that, I got the odd Christmas card from her, one with the news that she had married and was expecting a baby. The only long letter she sent was a plea for help when she and her husband wanted to immigrate to Canada. I wrote back with the truth — there was nothing I could do. They would be wiser to contact the Canadian Embassy in Warsaw.

I sometimes regret that I didn’t call Magda out more on her comments. I told myself that if any such thing happened again, I wouldn’t be so peace-able.

(I realize I have not written here about my actual visit to Auschwitz . Suffice to say it marked me. Suffice to say I would like a chance to go back, now that I am older, and I hope, have a better understanding of its significance.)

It was 1999, during the NATO intervention in the former Yugoslavia. I was back in Toronto and had been invited over to dinner at the house of friends, a couple I had met at university. They were now married, with two very young kids and living in a leafy, lovely and expensive part of the city. The TV was on as we enjoyed pre-dinner chat and somehow, what was unfolding in Kosovo caused the wife to say, with a certain contempt, that we wouldn’t be hearing about the atrocities that had been occurring in the former Yugoslavia 50 years from now. Lest there be any doubt about her meaning, her husband chimed in that this was because the Bosnians had no equivalent of a “rich Jewish lobby” and “Jewish-owned media” to “force us” all to hear about the Holocaust “all the time.”

I remember feeling like I had been jackbooted in the stomach. I had known these people for over a decade — we shared similar backgrounds and upbringings — and, until that night, I had always felt at home with them. Admittedly, there were long periods during which we had no contact other than a birthday card, but I had never heard them speak such nonsense. Were these views newly acquired? Had they held them for years? It wasn’t as though we often talked politics. I managed to stammer out that I believed we would be hearing about the ethnic cleansing in the former Yugoslavia decades from now, and that if we still learned and talked about the Holocaust fifty years after the war, it had nothing to do with any lobby, and everything to do with its importance — what Norm Geras would later call its uniqueness and its universality. I requested a change of topic and made a mental note to trust my gut, which generally tells me staying home is the safest bet.

It was the summer of 2003, and I was asked out by a very handsome fellow. Khaled had immigrated to Canada from Jordan 20 years earlier and was an engineering professor at a Toronto-area university. He laughed easily and often. On our first two or three dates, I tried to avoid any discussion of politics, as 2003 was also the first summer of the war in Iraq. I was living by Basil Fawlty’s Don’t Mention the War mantra.

But there was a war I inadvertently mentioned. Khaled had studied in Amsterdam, and given that I had visited the city myself, I asked him about its many museums. He reeled off a list of those he had visited — Rembrandt House, the van Gogh Museum, the Rijksmuseum. “What about Anne Frank House?” I asked. I wince at the cliché of it all, but the mouth that laughed so often and so loudly stiffened. No, he said. No, he hadn’t visited Anne Frank House because it represented “something that is exaggerated and gets too much attention.” I asked him what he meant, though I didn’t need to. I knew what was coming.

The Holocaust wasn’t “that bad,” the numbers “can’t be trusted,” there may have been deaths in camps but actual “death camps” could not have existed, “Jewish financiers” started the war anyway and various other calibrations. He told me the story of his great lost love, a German woman (a piece of his particular puzzle) whose father had been sent to Stalingrad. German soldiers suffered as much as any Jew, he said, “but there is no Anne Frank House for them.” I let him know how unimpressed I was with his theories, and he quickly attempted a bit of back-pedal, generously conceding that the Jews had been done “an injustice,” but that it was “not as bad as current injustices perpetrated against the Palestinians.” He protested that as “a scientist,” it was normal that he should doubt the numbers — most of us dopey non-scientist people weren’t trained to do so, he argued, so we gullibly accepted what we were told by generations of Jewish-controlled media and blah blah blah. I tuned out the rest and things ended before they began.

Whatever you say, fella.

In April 2015, I attended the Festival Internazionale del Giornalismo in Perugia, Italy, a city I know well. After the first day of lectures and workshops, I went for a walk with Mauro, an Italian acquaintance, and we happened to pass by one of my favourite plaques in the city. It honours local young men who died fighting what Italians call Nazifascisti. It was erected in 1945 and refers to Teutono Bestiale or ‘the beastly Teuton,’ and Turpe Fascista or ‘filthy/vile Fascist.’ Yes, the Nazis were beastly and the Fascists vile, but I can’t imagine such language being used today, even in Italy, where the threshold for politically incorrect blunt-speaking is rather higher than in the Anglosphere. I think that is why I find the sight of that particular plaque rather refreshing. The choice of words almost makes me laugh. 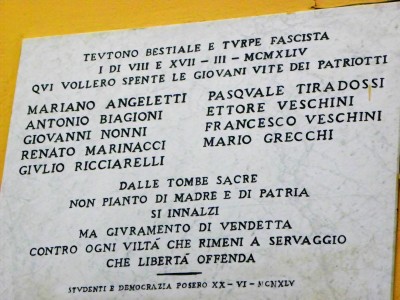 I directed his attention to it, and the conversation turned to the war, with Mauro asserting that the Shoah was bad, but why do we always have to hear about it? What about Rwanda? I pointed out that we do hear about Rwanda, as well we should. It isn’t either/or. He tried another tack: Jews have a lot of money! They’re rich, and that’s why we have to hear about the Shoah “all the time.” For good measure he added that what the Israelis were doing to the Palestinians was “the same” as Auschwitz. When I dismissed that last comment as patently absurd, he didn’t respond, instead carrying on about Jews being rich and powerful and diamonds, diamonds, diamonds. They’ve got lots of diamonds!

I should have dropped it right there and gone back to my hotel. But I persisted, which — other than the work-out it gave my Italian — was a sorry exercise in futility.

These are, by no means, the only unpleasant incidents having to do with the Holocaust that I’ve experienced. But they’re the ones that surprised and upset me the most, that woke me up, that ended some relationships and nipped others in the bud. Sadly, there seems to be an on-going supply of them.

I spent the latter part of 2016 taking an advanced Italian course at a university in Umbria, and one of my teachers taught us grammar through Italian literature. It was the class I enjoyed most — we got to read Pirandello, Calvino, Manzoni and others in the original Italian, increase our vocabulary and improve our knowledge of verb tenses. But there was one author she never touched, one I had always loved to read in English: Primo Levi. As she was wonderfully approachable, I decided to ask her about it. “Oh,” she said, looking embarrassed. “We try to avoid anything controversial in our classes.” I asked her how Levi was controversial. “We have,” she said, looking embarrassed, “students from Libya, we have Palestinians, Egyptians, and others who might not like it.”

I thought about my classmates, Middle Eastern and otherwise, and I thought she was selling many of them short. Soft bigotry of low expectations, anyone? And why assume only Middle-Eastern students might have a problem with reading Primo Levi? My experiences tell me that anti-Semitism is pan-cultural. And if the risk for “controversy” exists in a classroom, isn’t the job of a teacher to teach? My professoressa implied it was a directive from above; she hadn’t a choice.

About a month after that conversation, the same professor led our class in a discussion of same-sex marriage and abortion policies — or the lack thereof — in our various countries. Nothing controversial there.