Years ago, I lived in France on Boulevard Voltaire, not far from the Bataclan. I never went to the Bataclan because I was never groovy. I did go to see Etienne Daho at Bercy Stadium one time. My apartment was near Place Leon Blum, named after the French politician who, prior to World War II had been the Prime Minister of France and then during the war had been deported (he was Jewish) to Buchenwald and Dachau and Tyrol and then after the war became Prime Minister again. Seriously. Only in France. (I believe his brother died in Auschwitz.)

In 2005, on a trip to Israel, I visited a kibbutz named after Blum – Kfar Blum, it was called. I was with a group of journalists and I shocked them all by knowing who Blum was. I also shocked the lady from the kibbutz who was tasked with taking us around the place — she told me that no one other than French visitors ever knew who Leon Blum was. (I shocked her even more the next morning when I took a whole mess of fish from our breakfast buffet and fed it to Kfar Blum’s many stray cats.)

A few doors down from my apartment on Boulevard Voltaire there was a convenience store run by a Moroccan family. The father had come to France from North Africa but his sons were all born and raised Frenchmen. They were terribly nice and used to help us (my roommates and me) with our bags and suitcases and such when we returned home from trips. I remember that they loved wearing muscle shirts and showing off their good looks. (Why should youth not be so?) They were terribly sweet and I was grateful for their store because, at the time, it was very difficult to find a grocery store open after 7 p.m. in Paris (not the case now). So I had somewhere to go to buy bottles of wine and Lindt bars.

I keep thinking about that time in my life and about Mustapha Dupont, a Gilbert Becaud song from 1984. I moved to France in the late ‘80s and stayed there nearly five years; long a Becaud fan, I enjoyed that song and its idealism regarding French Muslims, an idealism which one could be forgiven for now considering rather quaint.

Some of the lyrics:

If you don’t speak French, those lyrics talk about three French Muslims who are all ‘bon Francais’ (good Frenchmen), one of whose father died in World War II fighting (one presumes, given the date of the action and the point of the song) for France. The repeated lyric, at the end, is about the colours of “Team France.” Every colour, says Becaud. Team France is red, orange, yellow, green, blue, indigo and violet.

I bring this song up because I was at a dinner the other night where someone said that France was basically getting what it deserved – in regards terror attacks — for not having properly integrated Muslims. Um, wtf??? Apart from the victim-blaming of the comment, it simply isn’t true. While there is no question that European countries, in general, are not anywhere as good as we (meaning Canada and the United States) are at integration, the vast majority of French Muslims are just that, integrated and very well so. And while I have no doubt that many French Muslims have had to deal with stupid comments or other forms of ignorance, saying France is getting what it deserves is, well, stupid. As though a natural response to discrimination is to shoot up a restaurant, a magazine, a nightclub, a Kosher supermarket. Further, French Jews experience far more hate-based attacks than any other group (French Jews make up 1% of the population but are the victims of 51% of hate-based attacks in France) and I don’t seem them shooting up innocents.

In short, there is a deeper problem here, a sort of mass pathology, as Paul Berman wrote about so eloquently here.

A couple more useful links here and here, and my own observations when I returned to France in 2014 and 2015, regarding what I viewed as a clear improvement in just how well integrated the French Muslim population had become.

Of course, there are neighbourhoods that are a mess — Clichy-sous-Bois, where the 2005 riots erupted, comes to mind. To some degree this is the result of a “hands-off” approach – a big mistake that comes from cultural relativism, moral equivalency, political correctness…and fear, I imagine. A bad idea by any other name is a bad idea. We in the West have become cowards (I blame Baby Boomers). We are unwilling to protect values that have been centuries in the making, values from which every group could benefit. This is currently playing out in Germany and other parts of Europe. When people won’t integrate or obey the law, there is nothing unreasonable or bigoted about jailing them or deporting them if they are not legal or talking honestly about the problem, rather than trying to hide it for fear of appearing intolerant. Islamism is not Islam and it shouldn’t be difficult to say as much.

I believe such an approach would make life better for those who want to assimilate (and by assimilate, I don’t mean giving up one’s religion or freedom of worship). There is also nothing unreasonable with making sure refugees/immigrants are carefully vetted.

I am an idealist. I see no reason that Becaud’s lyrics can’t reflect reality. And in many ways I think they do.

See here two pictures taken last March, when I was in Paris. The first is a plaque from inside the Grand Mosque of Paris, commemorating Muslim soldiers who died for France in World War II. The second is a plaque honouring a ‘spahi’ – regiments of the French army recruited primarily from the Maghred – who died during the liberation of Paris. 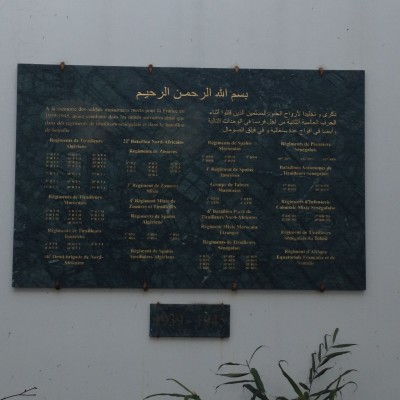 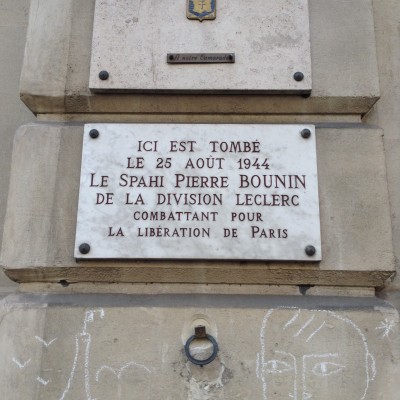